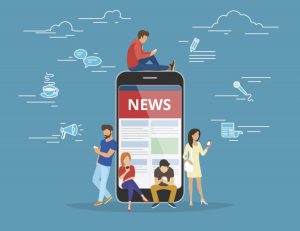 Native advertising is major trend within the marketing world at the moment but many people don’t actually know what it is. Although this new technique may not be very well known, it’s becoming much more prevalent and it’s likely most people have already seen a native advertisement when surfing the internet.

So what actually is native advertisement? It’s the name given to paid adverts which are created to mimic the content of the platform they are on. For example, a promoted video on Youtube, a paid ad in Google’s search results or a sponsored article on a news website. The whole concept behind native ads is that they “blend in” and are therefore more likely to be engaged with. To put them in to context with other marketing techniques, they’re a middle ground between banner ads and traditional content marketing.

Sponsored advertising can be found on a wide range of websites and platforms but it tends to be concentrated on social networking sites (Facebook, Twitter, Instagram etc.) and major publishing platforms. Basically any online locations which attract a high level of content consumption.

There are specific benefits to native advertising which is why it has become so popular in recent years. As we’ve already mentioned, one of the main advantages to these types of ads is that they don’t look anything like standard advertisements. This is important as many people have become so accustomed to traditional banner ads that they don’t even see them anymore- it’s called “ad blindness”. Native advertisements look and act like content and even when consumers know that they are sponsored, they’re still more likely to engage with them.

There is empirical data to back up the idea that native advertising is more successful than traditional marketing. For example, the MMA report found that users were 40% more likely to interact with native ads with factors such as attention (3x more) and recall (2x more) also higher when compared with display adverts. Further research seems to corroborate these findings with a study from Sharethrough finding that consumers looked at native advertisements 53% more frequently than display ads.

As well as the initial engagement, native advertising also offers benefits in the way in which consumers interact with it. The use of sponsored content is much more likely to leave a lasting impact, with the brand being able to build a meaningful relationship with the user. With so much wariness around business in general in recent years, the ability to reach out to the consumer and create a connection is worth its weight in gold.

Another positive aspect of this technique is that consumers are much more likely to share these ads via social media, which is basically free advertising. This also opens the door for the possibility of “going viral” – when your ad is shared exponentially and reaches a massive audience. The likelihood of sponsored content being shared is dependent on many factors such as the platform it’s on, the title and the images used but the potential is definitely there.

Although it’s quite clear that there are many advantages to utilising native advertising, there are also some drawbacks. One of the obvious disadvantages is that native ads require content production and are therefore more resource heavy when compared with display ads.

Arguably the biggest problem with native advertising is the potential for backlash. More specially, consumers who feel like they have been “tricked” into engaging with a piece of content, only to find that it’s an advertisement. Sponsored content is always labelled as such but since the idea is to blend in with the platform, it’s not surprising that many users assume they are just looking at normal content. This has been reflected in research by CivicScience that found that 61% of respondents thought that sponsored content harmed the credibility of the publication in question and 54% don’t trust sponsored content. Considering one of the benefits of the native technique is being able to build a better relationship with consumers, these figures are worrying.

There is a possibility that native advertising is still too new for us to gauge the lasting impact it will have on the marketing world. There may be a novelty effect happening now and consumers will become just as exhausted with native ads as they have become with display ads. However, it is also possible the sponsored content marketing is the next big step in advertising and an invaluable tool for companies to interact with potential customers.