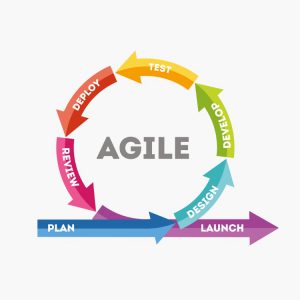 Agile Marketing is an approach which differs from traditional techniques, placing more emphasis on collaboration and incremental improvements. However, it didn’t actually start life in the marketing sphere. The concept began its life in the software development industry, back in the 90’s.

The software development industry was having big issues with their existing structure, known as the Waterfall approach. Basically, it involved a rigid hierarchical system in which managers would collect large amounts of information on the prospective software that was being developed and these would be the “requirements” given to the developers. These techniques led to many different problems, for example the projects would go over time and over budget. Even worse, the final product often didn’t meet consumer requirements and therefore didn’t sell. This continued until a group of seventeen software developers come together to create the very first Agile Manifesto- offering a completely different approach.

The Agile approach incorporates many different techniques as well as an overall change in mindset. To condense the main aspects- it’s a collaborative, top-up system that aims for smaller, more mindful increments along the way. Whilst this revolutionised the software development industry- it has been adopted by the marketing sector, with great success.

Looking more broadly at agile marketing and how it compares to traditional approaches- there are a number of key differences. As we have already mentioned, one of the main differences is the way in which team members interacts, with a greater emphasis on team work and collaboration. This also includes managers, who work with their employees as opposed to imposing strict deadlines within rigid frameworks.

As the name agile suggests- another major difference is the approach to targets. Whereas traditional marketing may include a detailed long-term plan with fixed targets- agile marketing has a greater degree of versatility. For example, instead of a one-year plan- there would be short term targets with regular meetings in order to understand where everyone is at. This technique also means that the overall plan is more fluid and open to change or influence from the market. One of the benefits of this is that companies can adapt to current events and feedback, making it much more likely that the final product is successful and relevant.

In terms of the campaign, there is obviously a push towards what the team knows works well but there is an element of experimentation- which is another hallmark of agile marketing. Many companies using this approach will devote the majority of their time and resources towards tried and tested approaches but will also allow for some risk in the form of more novel techniques or media. This way you are able to try new things with the potential of striking gold but there isn’t much risk involved.

Data and testing is another important aspect of agile marketing. Of course, data is vital across marketing in general but particularly so when companies are utilising this technique of rapid iterations. The use of data can completely change the way in which a campaign is progressing and this is much more useful when the campaign is flexible and open to change, as opposed to a long-term, fixed plan that is forced to remain on the same path.

One of the ways in which the agile approach is particularly successful within the marketing sphere is due to social media. The majority of marketing is now online and social media is one of the most powerful tools that we can use. One of the key aspects of social media is the speed at which is moves- news, events and campaigns can be here today and gone tomorrow. Therefore, an approach that is literally agile and open to rapid change is always going to work better with the likes of Facebook and Twitter.

This is something we have seen in recent years as there are many examples of companies using their online presence to respond to current events with media and advertising all ready to go. Those that utilise a more fixed approach to marketing may not be as nimble when it comes to response time.

Although agile marketing is based on a fairly old concept, it’s practically tailor made for our current world, where the ability to adapt and offer something completely relevant to the current conversation has never been more important.