First Directory is a free resource to bring you more business. We have: 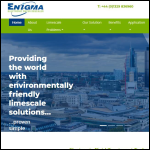 Naturally hard water effects 70% of the United Kingdom and just about every other country in the world. It is good for our bodies but calcium carbonate, or limescale as it is better known, isn’t good for water systems.

It narrows pipes, blocks jets, reduces thermal efficiency and is expensive to remove.

In the United Kingdom alone, it is estimated to cost industry around £1billion a year just in descaling. Further £billions are wasted in lost production, early renewal of capital equipment, chemicals and increased energy bills.

Scale need no longer be a major problem or cost to industry. In recent years modern technology has been developed which can permanently treat hard water scaling without chemicals, acids or expensive softening equipment.

Independent university tests have confirmed the ability of ENiGMA to remove existing limescale and prevent formation of new deposits.

The ENiGMA provides a simple and economical solution to the limescale problem. It has been successfully installed for customers from all sections of commerce, industry and government.

Wherever hard water is used, the ENiGMA helps to maintain maximum efficiency in water heating and cooling systems.

If you've any questions about Environmental Treatment Concepts Ltd products or services feel free to ask them here.

The map shows the location of Environmental Treatment Concepts Ltd